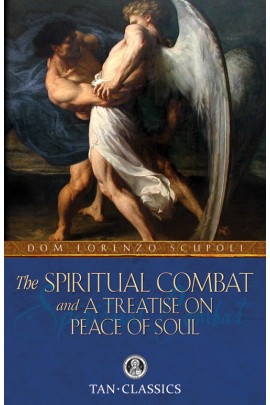 THE SPIRITUAL COMBAT
AND A TREATISE ON PEACE OF SOUL

The Spiritual Combat - and A Treatise on Peace of Soul. Salvation and spiritual perfection should not be sought haphazardly; a strategy is needed to win the battle for our souls.
The Spiritual Combat, first published in 1589, provides timeless guidance in spiritual discipline. St Francis de Sales (1576-1622) read from it himself every day and recommended it to everyone under his direction.
Vigorous, realistic and full of keen insight into human nature, The Spiritual Combat consists of short chapters based on the maxim that in the spiritual life one must either "fight or die". Fr. Scupoli shows the Christian how to combat his passions and vices, especially impurity and sloth, in order to arrive at victory.

Our new TAN Classic collection is a well balanced sampling of the finest literature in the Catholic Tradition. The collection will include distinguished spiritual works of the Saints, famous biographies, philosophical treaties from prominent Catholic churchmen, and compelling Catholic fiction.
No. TC1115.
ISBN: 9780895551528
Price: $14.95
Ordering Information

The most Holy Trinity confirmed the desire of my Queen, assuring that God will bless all those who, by their support and help, contribute in the making of the Holy Statue, as well as all those who help spread this devotion (to Our Lady of Good Success) throughout the centuries, making known its origin and these apparitions in the 20th century. This will be a time of great corruption of customs...the sacred sacrament of Holy Orders will be ridiculed, oppressed and despised, for in doing this, one scorns and defiles the Church of God, and even God Himself, represented by His priests. The Demon will try to persecute the Ministers of the Lord in every possible way..." Sr. Marianne de Jesus Torres - Seventeenth Century

An Evening with an Exorcist - Fr. Thomas Euteneuer

THE DEVIL DOES HE EXIST AND WHAT DOES HE DO? - By Fr. Delaporte

EVIDENCE OF SATAN IN THE MODERN WORLD By Fr. Leon Cristiani

ANGELS AND DEVILS -
The most thorough book about the Angels yet written in modern times! by Joan Carroll Cruz

The Smoke of Satan: How Corrupt and Cowardly Bishops Betrayed Christ,
His Church, and the Faithful . . . and What Can Be Done About It

An Evening with an Exorcist - Fr. Thomas Euteneuer

Gay and Lesbian Sodomites vs Marriage

Most complete report on Anti-Christ ever made. Shocking speech of Fr. John O'Connor. Fr. O'Connor shows how we will be able to recognize the Anti-Christ through Bible and Current Events, that he is alive and prepared to enter world seen, about infiltration of Catholic Church, about the New World Order, end of US independence, One World Socialist Atheist Government, Wars, Paper Money, Homosexual infiltration of the Catholic Church, Our near Future, How to prepare our self for persecution and more ... Must see. Best Seller.
(DVD 2 hrs long) ...........$ 19.95
Click Here to Order - Order Information 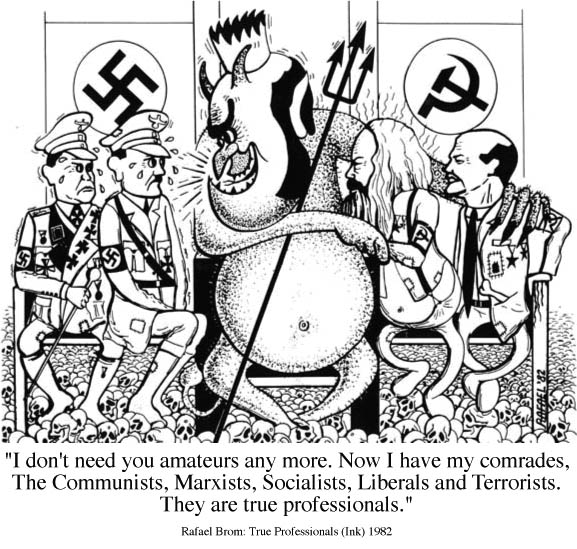 APOCALYPSE
Catholic Prophecies on Armageddon and The End of the World
Prophecies, Books and Videos

THE PROPHECIES OF ST. MALACHY

MELANIE AND THE STORY OF LA SALETTE By Mary Alice Dennis

THE ROSARY AND THE CRISIS OF FAITH Fatima and World Peace

THE BOOK OF DESTINY By Fr. H.B. Kramer

THE PROPHETS AND OUR TIMES By Fr. R. Gerald Culleton

THE REIGN OF ANTICHRIST By Fr. R. Gerald Culleton

The Third Secret of Fatima

Medjugorje - The Queen of Peace (Videos, Books and Audio Tapes)

Prophecy of The Third Secret of Fatima

The Kingdom of the Bride

CREATION Vs EVOLUTION and PRO-LIFE VIDEOS

The Creature from Jekyll Island

Latest Message from the Queen of Peace of Medjugorje

Medjugorje - The Queen of Peace (Videos, Books and Audio Tapes)

The New Age, Yoga Conspiracy of the New Age Movement, Evolution Conspiracy and One World Government

Prophecy of The Third Secret of Fatima

The UN's Crusade Against God and Family - Videos

Who is "The Queen of Peace"

Full Text of the Third Secret of Fatima not revealed?

In a 1980 interview for the German magazine Stimme des Glaubens published in October 1981, John Paul II was asked explicitly to speak about the third secret. He said: "Because of the seriousness of its contents, in order not to encourage the world wide power of Communism to carry out certain coups, my predecessors in the chair of Peter have diplomatically preferred to withhold its publication. On the other hand, it should be sufficient for all Christians to know this much: if there is a message in which it is said that the oceans will flood entire sections of the earth; that, from one moment to the other, millions of people will perish... there is no longer any point in really wanting to publish this secret message. Many want to know merely out of curiosity, or because of their taste for sensationalism, but they forget that 'to know' implies for them a responsibility. It is dangerous to want to satisfy one's curiosity only, if one is convinced that we can do nothing against a catastrophe that has been predicted." He held up his rosary and stated "Here is the remedy against this evil. Pray, pray and ask for nothing else. Put everything in the hands of the Mother of God." Asked what would happen in the Church, he said: "We must be prepared to undergo great trials in the not-too-distant future; trials that will require us to be ready to give up even our lives, and a total gift of self to Christ and for Christ. Through your prayers and mine, it is possible to alleviate this tribulation, but it is no longer possible to avert it, because it is only in this way that the Church can be effectively renewed. How many times, indeed, has the renewal of the Church been effected in blood? This time, again, it will not be otherwise. We must be strong, we must prepare ourselves, we must entrust ourselves to Christ and to His holy Mother, and we must be attentive, very attentive, to the prayer of the Rosary.

Lúcia herself is reported to have explicitly stated that the Third Secret contains Apocalyptic content. According to one source, when Lúcia was asked about the Third Secret, she said it was "in the Gospels and in the Apocalypse", and at one point she had even specified Apocalypse chapters 8 to 13, a range that includes Apocalypse 12:4, the chapter and verse cited by Pope John Paul II in his homily in Fatima on 13 May 2000.

A news article quoted former Philippine ambassador to the Vatican, Howard Dee, as saying that Cardinal Ratzinger had personally confirmed to him that the messages of Akita and Fatima are "essentially the same."

A TERRIBLE WARNING - THE MESSAGE OF OUR LADY OF AKITA, JAPAN: The third message on October 13, 1973, the actual anniversary of the final visions and miracle of Fatima is as follows: "As I told you, if men do not repent and better themselves, the Father will inflict a terrible punishment on all humanity. It will be a punishment greater than the deluge, such as one will never have seen before. Fire will fall from the sky and will wipe out a great part of humanity, the good as well as the bad, sparing neither priests nor faithful. The survivors will find themselves so desolate that they will envy the dead. The only arms which will remain for you will be the Rosary and the Sign left by my Son. Each day, recite the prayers of the Rosary. With the Rosary, pray for the Pope, the bishops and the priests. The work of the devil will infiltrate even into the Church in such a way that one will see cardinals opposing cardinals, and bishops against other bishops. The priests who venerate me will be scorned and opposed by their Confreres. The Church and altars will be vandalized. The Church will be full of those who accept compromises and the demon will press many priests and consecrated souls to leave the service of the Lord.

From Congregation for the Doctrine of the Faith in Vatican

Text of The Third Secret of Fatima:

VATICAN CITY, JUN 26, 2000 (VIS) - Given below is the complete translation of the original Portuguese text of the third part of the secret of Fatima, revealed to the three shepherd children at Cova da Iria-Fatima on July 13, 1917, and committed to paper by Sr. Lucia on January 3, 1944:

"I write in obedience to you, my God, who command me to do so through his Excellency the Bishop of Leiria and through your Most Holy Mother and mine.

"After the two parts which I have already explained, at the left of Our Lady and a little above, we saw an Angel with a flaming sword in his left hand; flashing, it gave out flames that looked as though they would set the world on fire; but they died out in contact with the splendor that Our Lady radiated towards him from her right hand: pointing to the earth with his right hand, the Angel cried out in a loud voice: 'Penance, Penance, Penance!'. And we saw in an immense light that is God: 'something similar to how people appear in a mirror when they pass in front of it' a Bishop dressed in White 'we had the impression that it was the Holy Father'. Other Bishops, Priests, men and women Religious going up a steep mountain, at the top of which there was a big Cross of rough-hewn trunks as of a cork-tree with the bark; before reaching there the Holy Father passed through a big city half in ruins and half trembling with halting step, afflicted with pain and sorrow, he prayed for the souls of the corpses he met on his way; having reached the top of the mountain, on his knees at the foot of the big Cross he was killed by a group of soldiers who fired bullets and arrows at him, and in the same way there died one after another the other Bishops, Priests, men and women Religious, and various lay people of different ranks and positions. Beneath the two arms of the Cross there were two Angels each with a crystal aspersorium in his hand, in which they gathered up the blood of the Martyrs and with it sprinkled the souls that were making their way to God."

Best DVDs Ever Made
on
Padre Pio and Sr. Faustina
by Award Winning Film Director J. Paddy Nolan of JPN
3 Documentary Films in one DVD
a JPN Production
Each over 2 Hours Long
Padre Pio
or
Sr. Faustina

Best and Most Complete 2 DVDs on
Padre Pio and Sr. Faustina Ever Made
Each DVD Over 2 Hours Long

BIBLES
Text of The Third Secret of Fatima - Complete Report from Vatican and Pope Francis
Books and Videos on Padre Pio
Videos and Books on Sr. Faustina and Divine Mercy plus Diary of Sr. Faustina
ROMAN CATHOLIC BIBLES - Family Bibles, Spanish Bibles, Church, School and Study Bible Edidions
Bishop Fulton Sheen - Audio CD, Videos and Books
THE DOUAY-RHEIMS BIBLE
Why Should You Read Only the Douay-Rheims Catholic Translation of the Bible?